From Farm to Museum

FROM FARM TO MUSEUM

Maison Saint-Gabriel, museum and historic site, is the oldest example of rural architecture in Montreal. It is where the memory of Marguerite Bourgeoys, Ville-Marie’s first teacher, and the passage of the King’s Wards are preserved.

Marguerite Bourgeoys arrived in Ville-Marie in 1653. She wanted to teach the children of the colony for free. She considered agriculture as the path to the material survival of her companions who had come to support her in her educational endeavour.

In 1662, she obtained a land concession in Pointe-Saint-Charles from Paul de Chomedey de Maisonneuve. In 1668, she purchased the house and land of her neighbour, François Le Ber. At first, the farmhouse was the place where the King’s Wards were welcomed in Ville-Marie.

Marguerite Bourgeoys transformed the land into a true model farm, thus guaranteeing her community’s self-sufficiency. In the 18th century, this farm was among the largest in Montreal.

Self-sufficiency and RecognitionIn 1671, this financial independence also enabled her to obtain Letters Patent from Louis XIV. These granted official authorization for the “establishment of the Congrégation de Notre-Dame in the said island of Montreal in New France.”

Until 1955, eighty-six sharecroppers succeeded one another in heading the farm. For almost 300 years, the farm at Pointe-Saint-Charles was at the heart of the Congrégation de Notre-Dame’s educational and agricultural activities.

In the mid-19th century, with industrialization and urbanization transforming Montreal’s landscape, the sharecroppers had to reduce their operations. 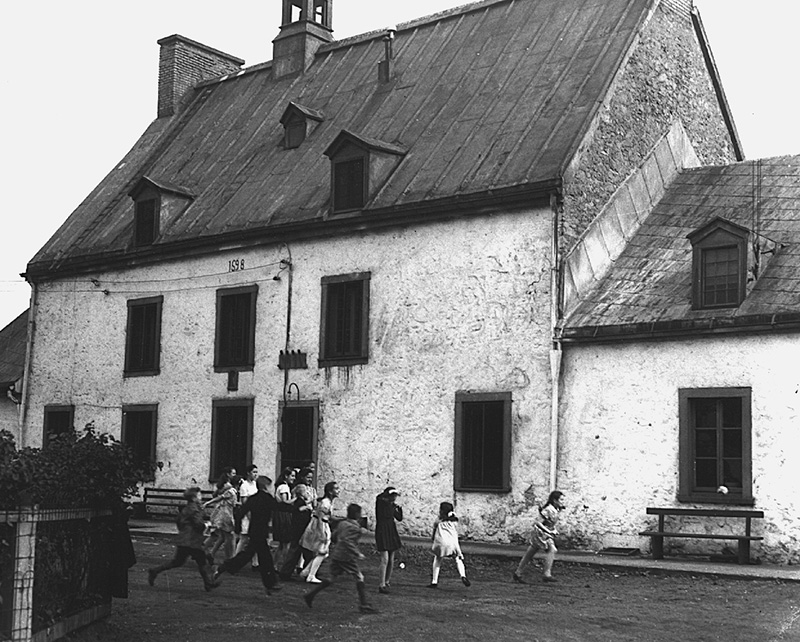 A New Vocation Recalling the bygone time of Montreal’s rural past, the old farmhouse attracted more and more interest. School visits multiplied, academics studied it, while others simply came to admire it.

In 1965, this magnificent house and the fieldstone barn were classified historic monuments. The following year, the sisters decided to make it a museum.

Since then, the institution continues a mission of education through history. Still today, Maison Saint-Gabriel, museum and historic site remains faithful to the educational vocation of the Congrégation de Notre-Dame.

A Heritage to Preserve and ShareThe museum is the only institution to communicate Montreal’s rural past on an authentic site. Through time, the members of the Congrégation de Notre-Dame have preserved this rich heritage.

Every year, thousands of visitors from here and elsewhere, accompanied by tour guides in period costume, discover Montreal’s rural past.

Mission of Education through History
As a “communicator of memory,” Maison Saint-Gabriel presents and explains the following elements to the public:

Commented Menu At the Table with Catherine Crolo

Do you want to stay on top of everything that happens at Maison Saint-Gabriel?

Receive all the activities of the museum by subscribing to our newsletter.

This section is in development, it will be online soon.

The commented menu experience is offered upon reservation only. Le Réfectoire is staffed according to reservations. Meals are also prepared accordingly. In order to avoid food waste and to prepare our employees work schedule as efficiently as possible, we ask that you please respect the following conditions of reservation and cancellation.

Group packages are available by reservation only. Additional personnel are required to provide this service. To enable us to staff the restaurant as efficiently as possible, we ask that you respect the following reservation and cancellation conditions.